Later this month, chambers of commerce from across Canada will be travelling to Saint John to make and reinforce connections, get professional development training, learn best practices and enjoy what the city has to offer. It is also a chance to influence national policy-making – with the national chamber and the federal government. The centrepiece of the conference is the policy debates, where resolutions submitted by local chambers from across the country will be debated by the delegates in attendance.

This year, the Fredericton chamber has two policy resolutions – one focused on the near-term and one more long-term.

The Start-up Visa program provides permanent residency to up to five co-founders of a company and their families to launch an innovative business in Canada. The SUV was designed to attract innovative foreign entrepreneurs who would contribute to the innovation needs of the Canadian economy and facilitate entry of innovative entrepreneurs who would actively pursue business ventures in Canada. To receive permanent residency under the program, applicants must receive support from a designated organization under one of 3 streams: venture capital, angel investment, or business incubation.

While originally mandated to be a streamlined process, Immigration, Refugees, and Citizenship Canada’s application processing times have recently increased by 202% (5.3 months to 16 months), making the program less attractive to potential applicants and creating a significant bottleneck. The very nature of startup businesses necessitates that the Startup Visa program is quick and nimble.

According to a Statistics Canada report1 released earlier this year, private incorporated immigrant-owned firms are much more likely than firms with Canadian-born owners to be job creators. Additionally, immigrant-owned firms have a higher level of net job creation per firm and are more likely to be high-growth firms than those with Canadian-born owners.

It is clear that immigrant entrepreneurs are a key factor in improving Canada’s economic and demographic deficits. The Start-up Visa program attracts these entrepreneurs to the region while also fostering a culture of innovation and inclusion. With the United States cancelling their version of the program, Canada has an opportunity to take a global leadership position in the international start-up field. Our resolution calls on the federal government to ensure the process timeline is no longer than six to eight months and communication between IRCC and service providers is improved.

Our second resolution is more long-term focused – dealing with fair taxation in the digital economy. Currently, tax treaties which Canada has in force with other countries emphasizes that business profits earned in Canada will not be subject to tax on account of income in Canada unless a sufficient amount of physical presence is established. This physical presence is called a permanent establishment, and can be established through such activities as physical facilities in Canada such as a head office or sales office, equipment located on a stationary worksite for an extended period of time, or employees who are present in Canada for a significant period of time.

These principles helped to simplify the application of income taxes in Canada and alleviate an undue tax burden where activities in Canada were incidental or ancillary to the primary profit generating activities of a foreign business. However, it is no longer the case that because a foreign business does not have a physical presence in Canada, that their business model does not include a focus on Canada as a significant profit generating location. Consequently, the tax system must be updated to keep pace with the emerging technological focus of today’s international commerce.

Currently the International Chamber of Commerce and the OECD are in the process of developing policy statements and principles on taxation in a digital economy. The OECD issued a public consultation document in March 2019 to solicit commentary on best practices to be included as part of their principles for OECD member countries to use as a guide.

This issue is timely, and as these frameworks are made public, and countries around the world adapt to tax digital commerce within their borders, countries without similar laws will be doubly penalized. Not only will they fail to receive the tax revenue on international commerce for sales to their residents, but their domestic businesses will also be subject to new layers of complexity and taxation when attempting to export through digital means. Canada should prepare themselves to act quickly once international frameworks are published and countries around the world enact their own laws.

The conference is an opportunity to showcase the great things happening in Saint John and New Brunswick as a whole. The Saint John Region Chamber of Commerce is celebrating its 200th anniversary this year – join me in congratulating them on two centuries of making connections, representing their members and helping grow the economy.

Krista Ross is CEO of the Fredericton Chamber of Commerce, a nationally accredited organization with nearly 1,000 members, is an active business organization engaged in policy development and advocacy that affects the competitiveness of our members and the Canadian business environment. The Chamber’s vision is ‘Stronger Community Through Business Prosperity 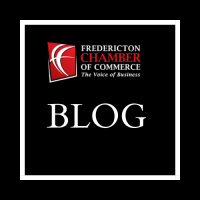